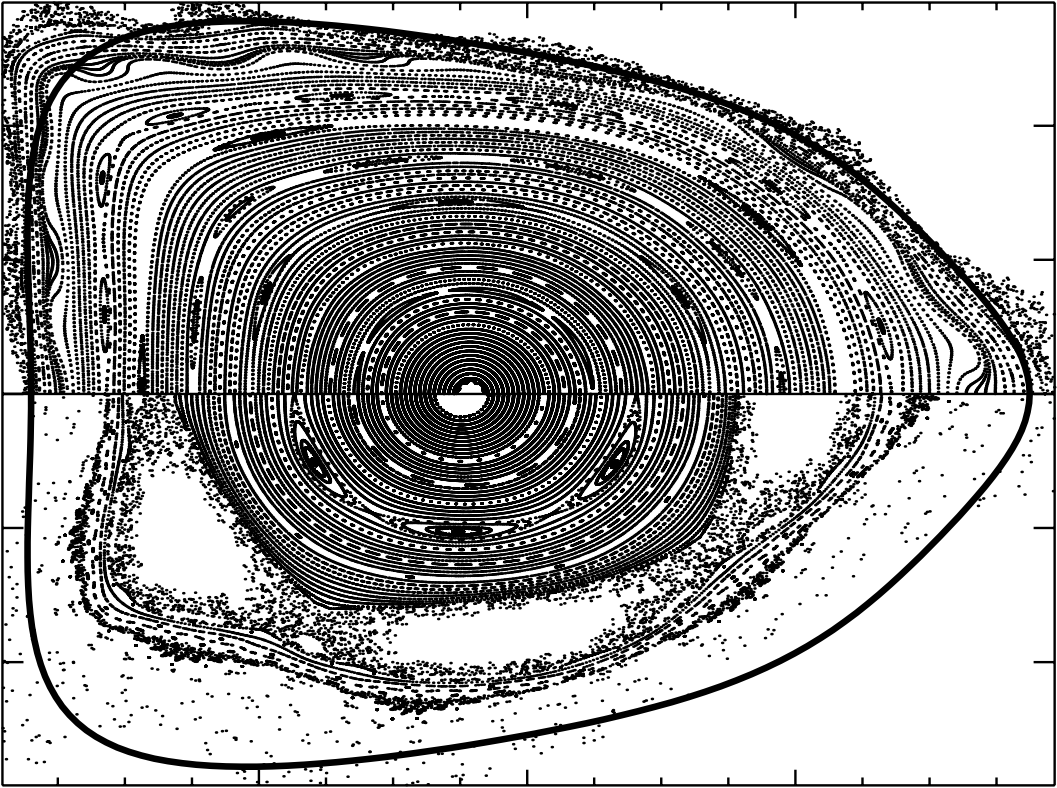 Magnetohydrodynamics (MHD) is the study of electrically conducting fluids. Models in which plasma is treated as a perfectly conducting fluid (ideal MHD) are the most successful models for describing the equilibrium and large-scale stability properties of magnetized plasmas. Resistive-MHD models, in which the plasma is treated as having finite resistivity, are used to study tearing modes and magnetic reconnection, which may change the topology of the magnetic field and convert the energy of the magnetic field into thermal energy. Still more complex models, which may treat the ions and electrons as separate species (two-fluid MHD) or include nontrivial fluid closures, are often called extended MHD models.

Including Flow and “Hall drift” into Multi-Region, Relaxed Magnetohydrodynamics

The famous Woltjer-Taylor plasma states [1] are constructed by a variational principle that extremizes the magnetic energy, $E\equiv\int[p/(\gamma-1)+B^2/2 ]dv$, subject to the constraint of conserved, (global) magnetic helicity, $K \equiv \int {\bf A}\cdot{\bf B}\, dv$. A novel extension of this theory, christened “multi-region, relaxed magnetohydrodynamics” (MRxMHD) [2], partitions the volume into $N$ sub-regions, ${\cal R}_l$, in each of which partial relaxation is permitted and by including a discrete set of “ideal” constraints that prevent global relaxation. Flow, ${\bf v}$, was added [3] by including $\rho v^2/2$ to the energy and by adding the “cross-helicities”, $\int_{{\cal R}} {\bf v}\cdot{\bf B}\, dv$, in each ${\cal R}_l$ as conserved quantities. These models [1,2,3] postulate that whilst partial relaxation is allowed, a subset of ideal-MHD invariants is conserved.

In most tokamak discharges, the plasma current slowly peaks until it becomes unstable to internal kink modes. This so-called “sawtooth” instability flattens the central current; at which time the process repeats. While these oscillations are generally benign, they are likely best avoided in burning plasmas: high-energy fusion products ($\alpha$-particles) can increase the oscillation amplitude, which may excite neoclassical tearing modes and/or edge localized modes, potentially causing major disruptions. Using the M3D-C$^1$ code [1,2], Dr. S.C. Jardin, Dr. N. Ferrarro & Dr. I. Krebs have found [3] another mechanism for preventing the current from peaking that involves a self-organized, dynamo action, which avoids these problems.

Numerical simulations and analytic theory have determined that, for certain, global parameters, the plasma will self-organize with the central “safety-factor”, $q$, slightly above unity and constant in a central volume (as shown in above figure, click to enlarge, which shows the (a) $q$-profile and toroidally averaged $p$ for 3D run, and 2D run with the same transport coefficients; (b) Poincaré plot in the final state with $(2, 1)$ and $(3, 1)$ islands present (central volume has $q=1$); and (c) Contours of electrostatic potential, $\phi$, produced by the stationary interchange mode), where $q$ is defined as how many times a magnetic fieldline travels around the torus the “long way” compared to the “short way”. Such a large, “shear”-free region is unstable to pressure-driven, “interchange” modes. The linearly-unstable, interchange eigenfunction extends throughout the shearless region and drives a strong, stationary, $(1,1)$-helical flow that then drives a stationary $(1,1)$-component of the electrostatic potential, $\phi$, (shown) and of the magnetic field (shown). These combine to create a $(0,0)$-“dynamo” voltage that prevents the current density from peaking in the center, hence maintaining the shearless region with $q$ slightly above unity in the central region, and with a broad current profile. This mechanism could explain the physics behind the non-sawtoothing “hybrid” discharges observed in DIII-D [4] and in many other tokamaks (see [3] for additional references).

Magnetic reconnection is a fundamental physical process allowing magnetic fieldlines to break the “frozen-in” constraint of ideal magnetohydrodynamics (MHD), i.e. to “tear” the magnetic topology, and thereby convert stored magnetic energy into plasma energy. Reconnection powers energetic events such as solar flares, coronal mass ejections (which can disable satellites), magnetospheric substorms, and also so-called “sawtooth” crashes in fusion device [1,2]. Reconnection typically takes place in a thin current layer. Sweet-Parker theory [3, 4] predicts that the current layer scales as $L / \delta = S^{1/2}$, where $L$ and $\delta$ are the length and thickness, and $S=L V_A / \eta$ is the Lundquist number, where $V_A$ is the Alfvén speed and $\eta$ the magnetic diffusivity. Usually, $S$ is very large, and the reconnection mass inflow velocity is too slow to account for the rapid reconnection events mentioned above.

The Sweet-Parker current layer is, however, unstable to a secondary tearing instability, called the “plasmoid” instability, when $S > S_C \sim 10^4$ [5]; and two-dimensional MHD simulations show that this instability leads to the formation of plasmoids that are connected by secondary current sheets, and the reconnection rate becomes nearly independent of $S$ [6]. Simulations in three-dimensions, with a guide field, show that the plasmoid instabilities grow at oblique angles and interact; leading to self-generated, turbulent reconnection [7]. Energy fluctuations form elongated eddies along the direction of the magnetic field, which is a signature of anisotropic MHD turbulence. The anisotropy is, however, nearly scale-independent, in contrast with scale-dependent anisotropy predicted by Goldreich-Sridhar theory [8], and so a new phenomenology is needed to describe the turbulent state. 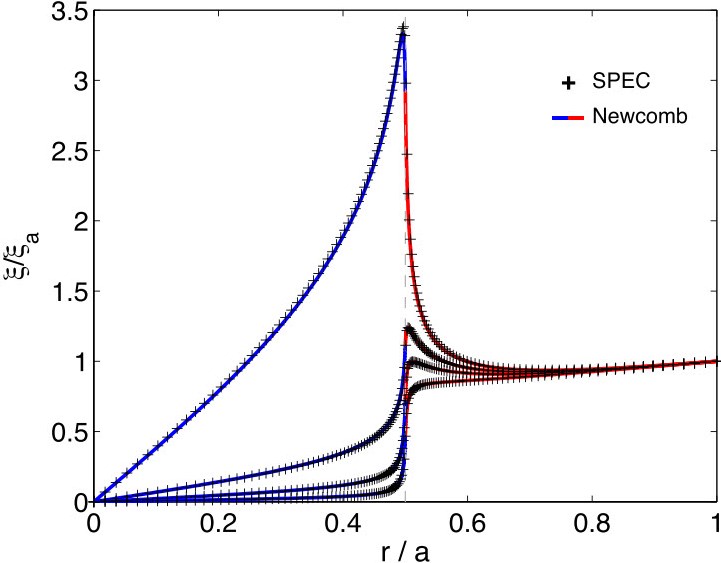 The new solutions, which are mathematically self-consistent , provide a qualitatively-different understanding: even in ideal-MHD, the geometrical distortion produced by RMPs penetrates past interior resonant surfaces and into the core of the plasma. The deformation is amplified by plasma pressure, increasingly so as ideal stability limits are approached [2]. The enclosed figure (click to enlarge) shows the penetration and amplification (computed in cylindrical geometry), and verifies the SPEC, nonlinear-equilibrium code [3] against the linear, analytic prediction; i.e. the solution to $\nabla \delta p=$$\delta {\bf j}\times{\bf B}$$+$${\bf j}\times\delta{\bf B}$. This is the first time that a nonlinear equilibrium code has been quantitatively verified against linear predictions.

Knotatrons, a New Class of Confinement Device in the Shape of a Knot! 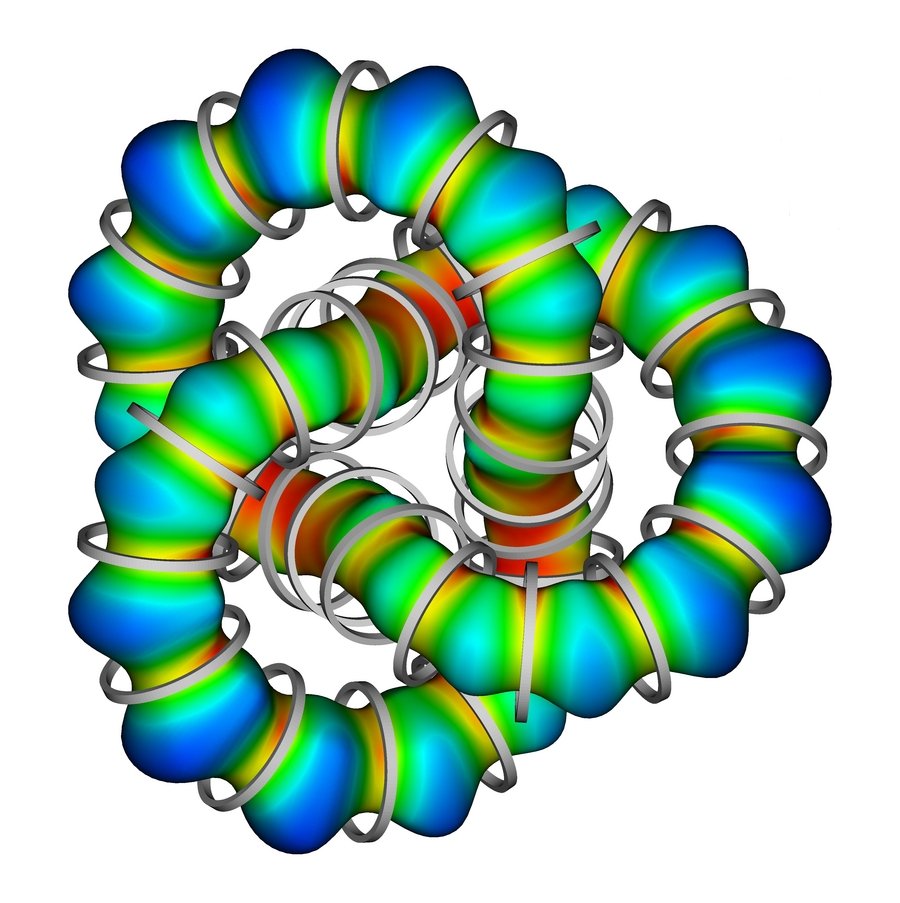 Magnetically confining a plasma exploits the fact that the motion of charged particles in a strong magnetic field consists of a free-streaming motion parallel to the field combined with a small, perpendicular gyration. To prevent so-called “end-losses”, modern experiments, such as the ITER tokamak [1] under construction and the Wendelstein 7-X stellarator [2] in Germany, construct magnetic fields that are “closed”; and because magnetic fields have zero divergence, $\nabla \cdot {\bf B} = 0$, the “hairy-ball” theorem shows that closed magnetic fields must be topologically toroidal.

Dr. S.R. Hudson, Dr. E. Startsev et al. generalized the tokamak-and-stellarator concept by introducing a new class of magnetic confinement device with the magnetic axis in the shape of a knot [3,4]. Such devices are called “knotatrons” [5]. Shown in the figure (click to enlarge) is a “trefoil”-knotatron, with planar, circular coils that produce a magnetic field with a large volume of closed, magnetic flux surfaces, with significant rotational-transform and shear.

Mathematically, a knot is defined an embedding, $K:S^1 \hookrightarrow S^3$, of a $1$-sphere (a circle) into the $3$-sphere; i.e. a knot is a closed, one-dimensional, non-intersecting curve in three-dimensional space, ${\mathbb R}^3$. This includes the trivial knot, the circle, which is also called the “unknot” (and so conventional tokamaks and stellarators are examples of unknotatrons ;-). There is a seemingly infinite variety of knots: given two non-trivial knots, a composite knot may be constructed by cutting each knot and joining the ends. Within each class of knot family it is possible to vary the geometry of the configuration to improve the plasma confinement. So, is there a class of knot that provides optimal plasma confinement? 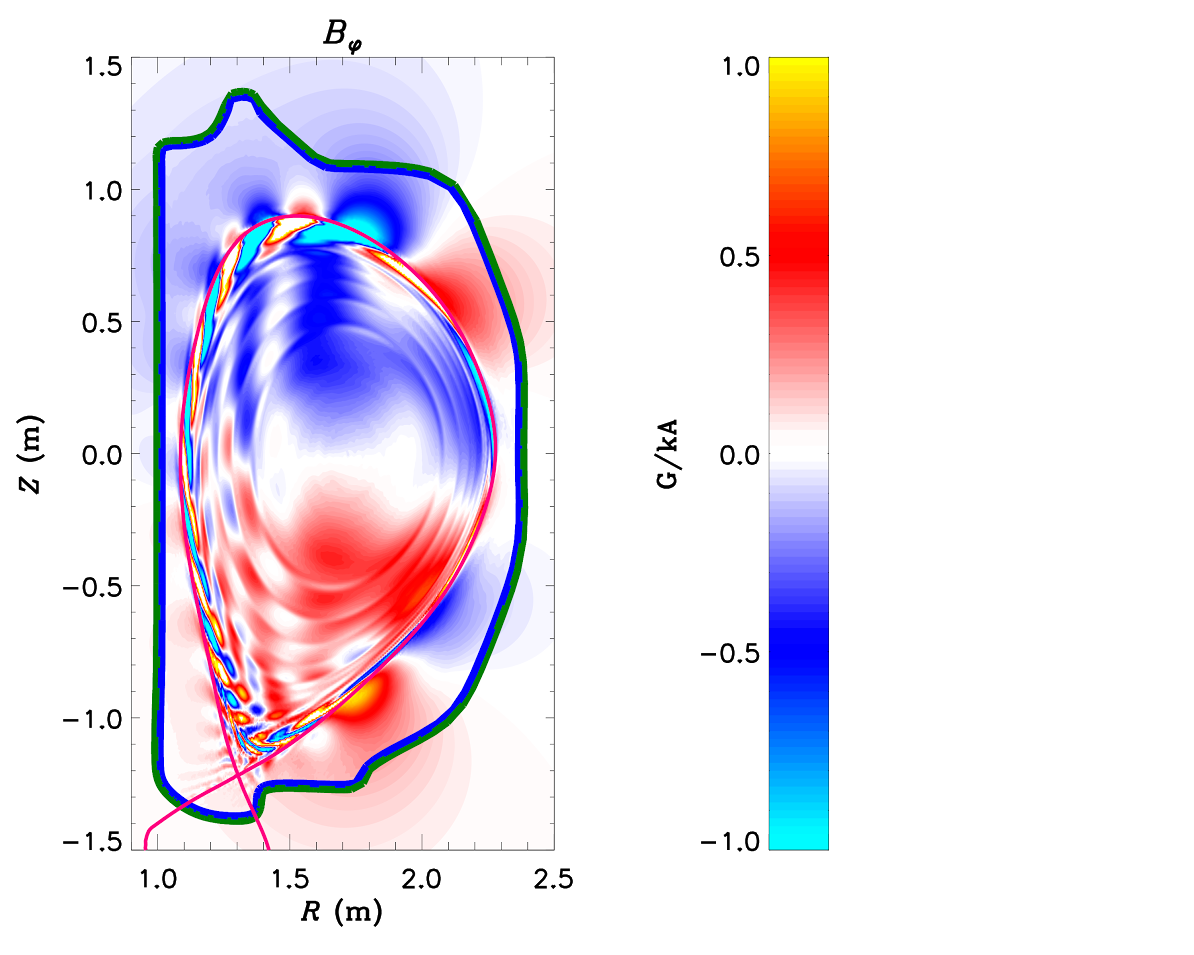 Non-axisymmetric fields can be applied by external magnetic coils in tokamaks in order to control particle and momentum transport, and to affect the stability of edge-localized modes (ELMs). These applied fields evoke response currents inside the plasma, which can contribute substantially to the perturbed magnetic fields in the plasma. Much of the challenge of understanding the effect of non-axisymmetric fields on the stability and transport properties of the plasma lies in understanding these complicated response currents.

The figure (click to enlarge) shows the perturbed toroidal magnetic field arising from the response currents [1] calculated by the extended-MHD code M3D-C$^1$. The case shown is for a DIII-D discharge in which even-parity $n=3$ fields have been applied by the DIII-D I-coils.