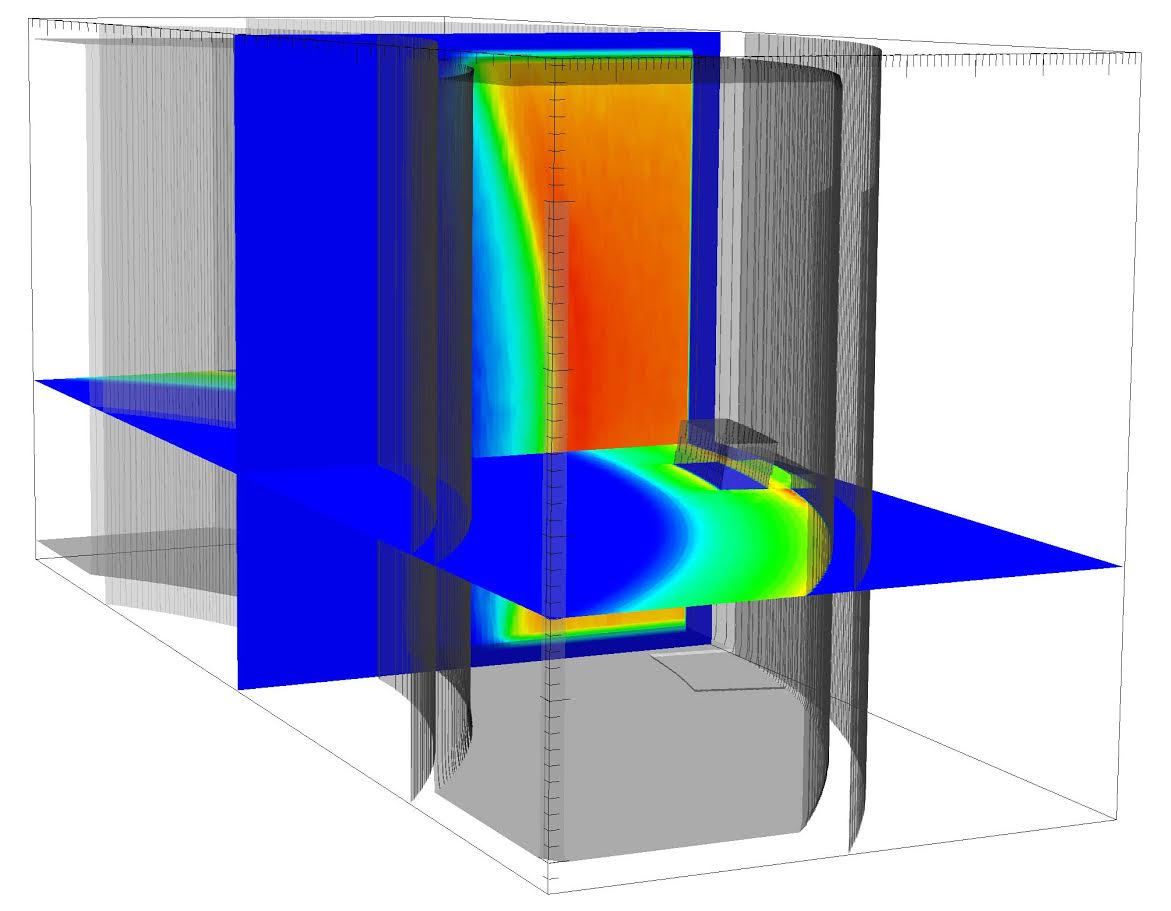 Neutral Transport
Neutral atoms and molecules are generated continuously in fusion experiments via the “recycling” of plasma electrons and ions as they strike surrounding material surfaces. Neutral transport modeling elucidates, both qualitatively and quantitatively , the interactions of these atoms and molecules with the plasma, e.g. how these articles cool and slow the plasma. The light emitted by the atoms in these interactions is also investigated, yielding information about the local plasma characteristics. 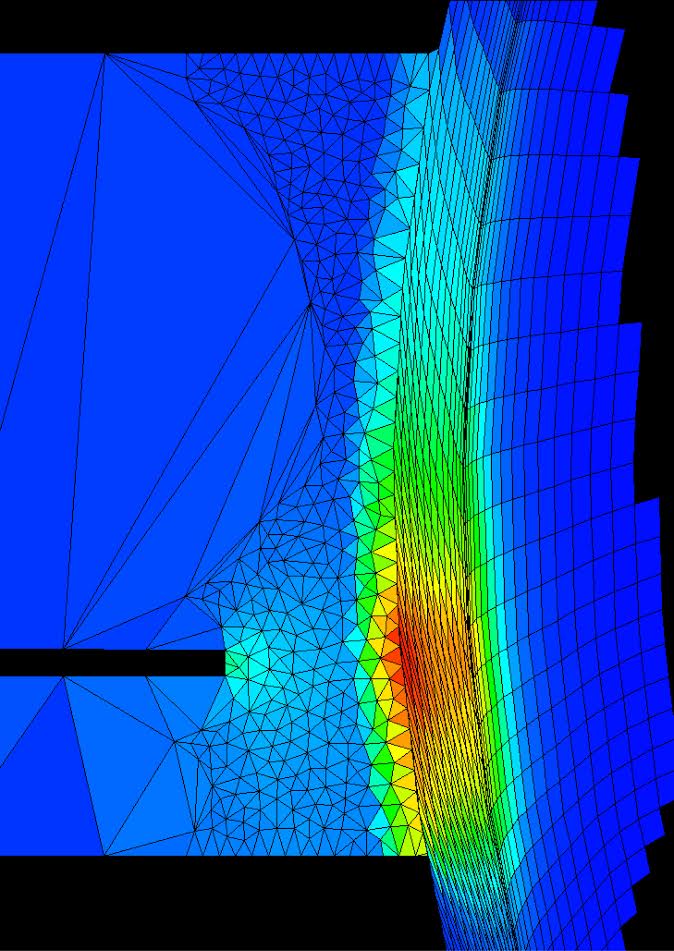 The rate at which photons of a particular wavelength are emitted by atoms in a plasma is given by a function, $f(\rho,T_e)$, of the local electron density and temperature, which can be determined from the rates of radiative decay, electron impact ionization, excitation, and recombination [1,2]. “Gas-puff imaging” exploits this relationship to study the plasma turbulence: turbulent structures traveling through the plasma boundary, in the presence of neutral atoms, glow more brightly than their surroundings. High-speed cameras record this light and, thus, provide images of the plasma turbulence. The required background atoms are provided by an external puff of gas.

Neutral-transport simulations [3] of that gas are essential to the quantitative analysis of turbulence data [4], providing insight into both particle and energy confinement at the plasma edge, and for validating turbulence-simulation codes; thus improving the confidence with which we can predict the performance of future, magnetically-confined plasma experiments, such as ITER [5].

The figure (click to enlarge) depicts the DEGAS 2 simulated [2,6,7] volumetric-emission rate for the 656nm line of hydrogen (Balmer-$\alpha$) resulting from a gas puff entering via the tube on the left (black bar) and penetrating into an Alcator C-Mod plasma [6]. To the left of the emission peak (red), the plasma is too cool and rarefied to excite the atoms; and to right the plasma is too hot and dense for the atoms to penetrate. Successful validation of these simulations led to a technique for quantifying the ambient neutral density arising from plasma recycling at the surrounding material surfaces [8]. 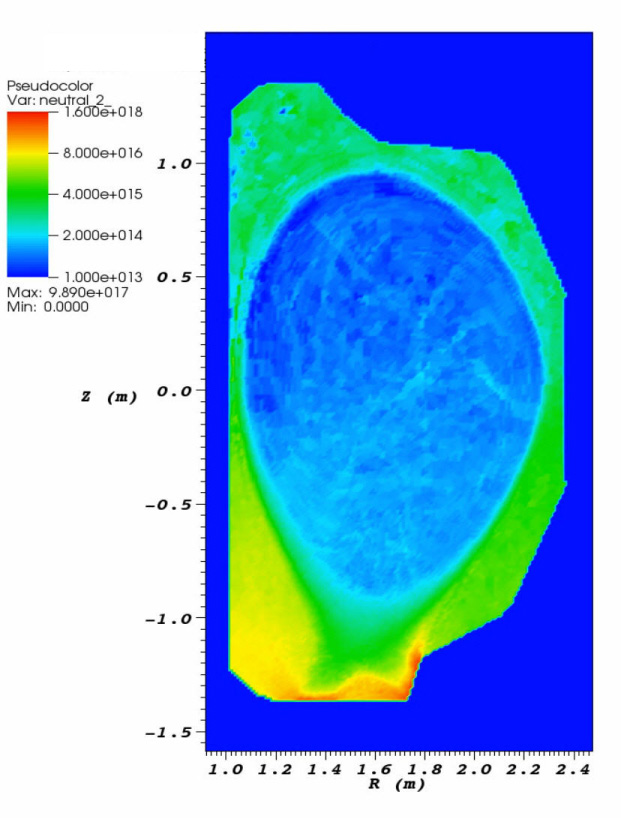 Simulations of plasma transport in the periphery of fusion devices must account for the effects of recycled atoms and molecules. A kinetic, Monte Carlo approach to simulating the neutral species allows for a detailed treatment of both the atomic physics and the geometry; the DEGAS 2 code was introduced in 1994 by Dr. D.P. Stotler & Dr. C.F.F. Karney with this application in mind [1]. DEGAS 2 was coupled to the UEDGE fluid plasma transport code in 1999 [2], and many applications of UEDGE-DEGAS 2 have been made since then and studies with it continue.

Recently, as part of the “Center for Plasma Edge Simulation” (CPES) [3], a “Scientific Discovery through Advanced Computing” (SciDAC) project led by Dr. C.S. Chang, the focus has been on incorporating DEGAS 2 with kinetic, plasma-simulation codes; in particular, to the guiding-center, neoclassical, particle-in-cell, plasma-transport code XGC0 [3]. The figure (click to enlarge) shows the deuterium-atom density, on a logarithmic scale, in the steady-state phase of a coupled, XGC0-DEGAS2 simulation [4]. The density is greatest where the recycling is strongest; that is, where the “open fieldlines” just outside the confined plasma strike a material surface. The atoms flow relatively freely near the boundary of the simulation, which is coincident with the tokamak vacuum vessel and is where both the density and temperature of the plasma are very low. Only a tiny fraction of the atoms are heated (by charge exchange with plasma ions) to energies great enough so that they can penetrate deep into the confined plasma. (The apparent structures there are the result of statistical noise.) Refinement of XGC0-DEGAS 2 continues within the SciDAC-3 successor to CPES, the “Center for Edge Physics Simulation” (EPSi) [5].